Living in Thailand you may envision yourself tanned, adorned in strings of rare beads, hair tied up in a scruffy bun and milling about in harem pants. Well absolutely NOT in Bangkok you aren't! Thai women are immaculate and Bangkok has a diverse fashion scene. I didn't have a particular style when I arrived here but after a few months in Bangkok I am sorted! 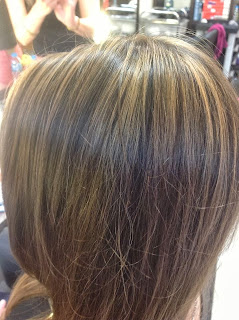 Thailand is a dangerous place to get your hair done, I have witnessed some monstrosities over the past year. We've had ambreing gone wrong, hair being bleached and then falling out, at home attempts to avoid the same fate of certain friends resulting in wonky fringes and lots and lots of tears before bed time. But finally we have the answer and he goes by the name Khun Phonatip. He has been doing Farang hair for over 15 years, he genuinely loves his job and he listens.

I have very long hair, which is 'soft like a child's' as Phonatip said. I'm aware it's damaged at the end, but I still don't want it all chopped off. So when I explained this to him and he very gently trimmed the ends leaving the length I was thrilled. He also saved me from selecting a brash blond for my highlights and instead steered me towards a warmer shade, good job Phonatip! He's is very kind and calm, he's not scissor happy either which means you can relax and let him do what he's best at. When he was finished he took photos for his Facebook page and the love he had put into it shone through.

Can you share any of your hair experiences in Bangkok? Have you had your hair done by Phonatip?


If you can bring face make-up with you from home, do it. Popular high street brands such as No.7, Maybelline and Revlon are here in abundance but most of the skincare products are in Asian shades, not surprising as were in Asia after all. If your prepared to go upmarket and buy MAC or Cliniqe from one of the department stores then you'll be fine, but if that's not in your budget you'll either work with it and have a slightly yellow face or give up and go natural. I've had a yellow face for about 2 months now, planning to stock up when I visit the UK at Christmas. Saying this, some of my friends have found their shades here but for others with more porcelain-rose skin tones it has been troublesome. Better be safe than sorry.

As for all other make-up you will find it here and quite often in stores such as Boots or Watsons there are promotions, BOGOF and buy 3 get the cheapest free. One thing I would advise against is fake MAC street make-up and similar items, it's 100% false economy and you end up throwing it away. Especially the mascara, I bought some and it was oozing out of the sides of the tube and when applied smudged all over my eye... no increased lash effect there. Some of the eye-shadow is ok, but it's usually poor quality and you could have bought something for the same price, no fancy label, but its a genuine product.

Have you ever used fake products, what did you think?